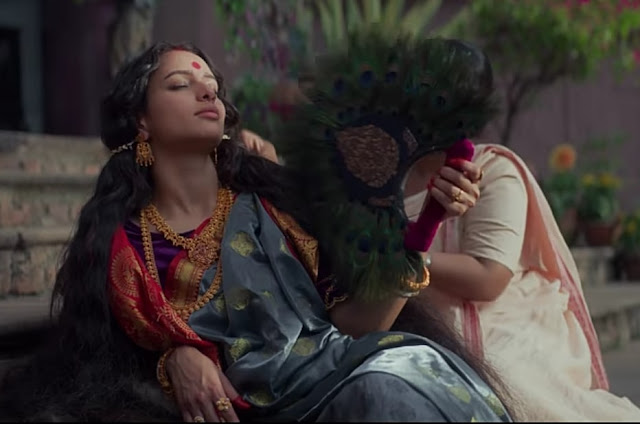 Cast – Tripti Dimri, Avinash Tiwary, Paoli Dam, Rahul Bose, Parambrata Chatterjee
Beginning with a playful young bride to a mature and kind of badass thakurain(mistress) in a leap of 20 years, we are driven curious over the mystery that led to such a drastic transformation of the lead Bulbbul. And it this mystery is what makes Bulbbul a powerful feminist tale bringing you to the edge of your seat.
The age-old stories of She-Demons(chudails) have been a haunting nightmare for almost everyone. With her long hair, feet pointed in the opposite direction and blood-sucking teeth, Bulbbul reinvents the concept of chudail without letting go of the preconceived notions. 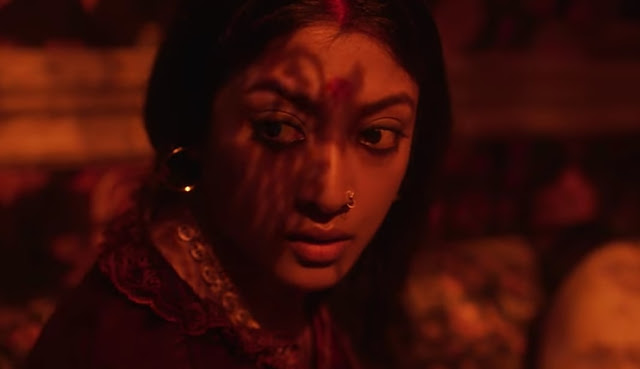 But it dives deeper, to explore the truth of a she-demon. And the truth unveils to correct the misbeliefs. Give a background check on her preys and you will know that she avenged the men who wronged women! She slew men who misused their strength to force themselves on women, young and old. She spared none and that is why we can’t help but agree to Dr.Sudeep –Chudail Nahi Devi hai who! (She is not a demon, she is a goddess)
Every character except Satya has a hovering shade of mystery and darkness. Their intriguing gaze screams the secrets that hidden deep somewhere in them and we are left curious to decode these secrets. This reminds of a famous dialogue by Binodini from Bulbbul, ‘Bade haweli main bade Raaz hote hain‘ (Big Mansions have big secrets). It is this secret that the film is all about, that our Bulbbul is all about.
The film is beautifully shot with the 19th-century Bengali essence very well depicted. The pink clouds along with music that sustains the scary mood do make Bulbbul a convincing horror movie. The art director has done a splendid job with the Bengali set of the pre-independence era. It was a visual treat. Anvita Dutt has always written very strong female characters who have a love for literature. Bulbbul is one of them too.
As a director, Anvita Dutt has done a good job in her debut venture.
Tripti Dimri who plays the titular role is able to bring out the innocent, young side of Bulbbul as much as she brings grace to the fierce side of the leading character. She deserves better opportunities. Rahul Bose is yet another exceptional performer in the film who makes us gasp for breath in an extremely violent scene. He aces both as the Bade Thakur Indraneel and his identical autistic twin Mahendra. Paoli Dam as Binodini, Mahendra’s wife carries with her crookedness and excels as a jealous sister in law.
The film carries a haunting aura till the end. The ending of the film is justified and we find it convincing. But the film at certain points trips in its own writing. Nonetheless, Bulbbul is definitely worth your time in this moment of pestilence and a fresh mystery fantasy thriller that you will enjoy.
Watch on – Netflix

Best Hindi Movies on Netflix that you can’t miss!