August 13, 2020November 18, 2020 by Anjali Pillai
While some of us are in our 20s still figuring out what to do in life, there is the remarkable Gunjan Saxena who knew what she wanted right when she was ten. She wanted to be a pilot and she becomes one, in fact, she goes on to become the first women pilot in IAF sent to Kargil War. 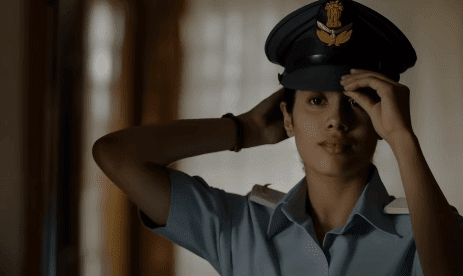 A great achievement indeed but not at an easy cost. Gunjan Saxena had to tackle a great deal of misogyny and sexism before she could become the name she is now. She had to prove her worth every time by working three times more than the men in her academy.

And the best thing about Gunjan Saxena –The Kargil Girl is that the film mirrors all these aspects without indulging in too much Bollywood melodrama. I did feel that such a film with war elements would have had a greater impact if seen in the theatres but waiting for this pestilence to over is challenging unpredicitibility.

Though Gunjan Saxena is about the first woman IAF pilot sent to war, the film is not a war movie and nor does it endorse chest thumping jingoism like most Bollywood movies based on the Kargil war of 1991. Gunjan Saxena The Kargil Girl is more about the woman who challenged the deep rooted patriarchy that decides and assigns professions based on gender.

There is a scene in the film where Gunjan feels confused about her decision to join IAF. She says to her father that the only motive for her decision is to swoop an plane and not intense love for the country to which her father says, “What do you think, people who say Bharat mata ki jai are the ones who deserve to join the army? As long as you do your job , you are serving the nation.”

We all have this misconception about joining army that it is usually reserved for a people who are immensley patriotic! Well, we need to unlearn such things. Our war movies are somewhere giving us a wrong perspective. You may want to join the army because of the reputation and perks and that is fine too. As long as you are sincere in your job, you are serving the country well. Such a well crafted scene.

The movie has a spectrum of men- Gunjan’s father, Anup Saxena who showers her with unwavering love and support, her brother, Anushman Saxena(played by Angad Bedi) who is cautious of his younger sister’s safety and protection, her boss who thinks she is nothing more than a liability for the force and a superior officer who sees her capabilities beyond her gender. All these men play a significant role in making Gunjan Saxena who she is.

Another favorite scene of mine is the one where her boss, Flight Commander Officer Dileep Singh, played by Vineeth Kumar Singh engulfs Gunjan in an ar wrestling match only to prove her that she is not strong enough.Woefully disappointed Gunjan questions him, “I’m here to ride a plane not to lift it!” A woman’s poor physical strength in comparison to that of man’s has led to many pre conceived notions and have been critical in deciding capabilities of the women community as a whole. This scene attempts to break that notion in the simplest way possible.

Jhanvi has done a splendid job as Gunjan Saxena and stood out in bringing the right emotions at the right time on the screen (Before you come up with “nepotism” judgement, she was really good, trust me!). Pankaj Thripathy as her dotting father also does a wonderful job though the role is a bit deviating from his usual kind of roles.

For the most part, Gunjan Saxena is a worth watching feel-good, poignant drama that deserves a good reception(Come on, we don’t get quality content from Bollywood all the time!

You can watch this latest Bollywood release on Netflix.