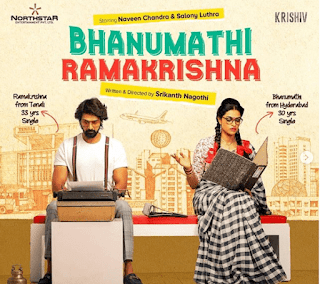 Rating  – 3.5/5Finding love in the 30s? Impossible, is what many of us think generally. Well, Telugu film Bhanumathi Ramakrishna tries to break this pre-conceived notion.

Bhanumathi, usually called as Bhanu, is a 30-year-old super confident carefree woman who is unapologetic in her choices. She is extremely independent and hates mediocrity.

Things go pretty much according to her plan until she is dumped by her “ideal” boyfriend for a much younger woman. In a usual movie style, this breakup must follow melodramatic sequences with so many tears and shenanigans but not in Bhanumathi Ramakrishna.

In a scene, she asks her father, “Why does my age matter? He dumped me because I was 30, well so was he!” Our society has an obsession with age and marriage. For a woman, turning 30 is nothing less than turning old. And if you are not married by that age, people around you start to behave like it is the end of the world.

Though stressed out, Bhanu does not resort to all the cliche breakup dramas, instead steps out to get herself a burger and color her hair. She manages to strike a balance in her life in spite of all the outer judgments that she is subjected to.

And that is when Ramakrishna, a 33-year-old Tenali native comes to join her as her assistant. One thing about him is enough to piss Bhanumathi, that he is a “mediocre”. In all these years, it is for the first time that he steps out from his home and work in such a big corporate.

We fall in love with Ramakrishna instantly. That’s how brilliantly Naveen Chandra essays the character, with subtle innocence and cheeky charm.

This is not a fairy tale romance nor a love-hate relationship. We find the leading characters explore themselves while they are together. They help each other to getting better and exploring diverse emotions. And the best part is how all this just naturally revolves without any melodrama or larger than life narrative.

The movie is not just about finding love in your 30s, but also about how our age is a criterion to define our capabilities. And this fact is what often pisses Bhanumathi. But the one thing that the movie speaks loud and clear is how not judging the person you love is the ultimate secret of a successful relationship.

The entire team of Bhanumathi Ramakrishna has done a great job in executing the film to perfection. They have ensured the film is not all preachy or contains unrelated nuances.

To sum up, Bhanumathi Ramakrishna is one light-hearted breezy movie that everyone would equally love.

Bhanumathi Ramakrishna is now streaming on the Aha video.