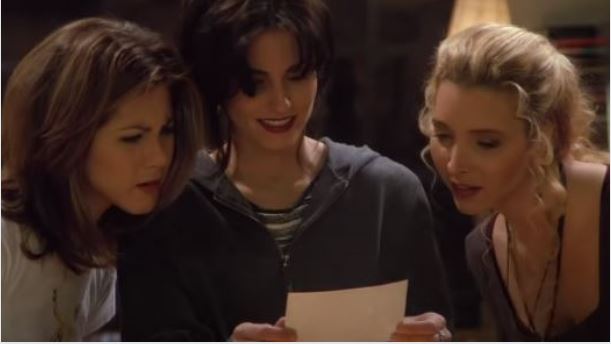 F.R.I.E.N.D.S – My Introduction to Liberal and Independent Women

Maybe because I watched it at a time when I was on the verge of 18, Friends somehow became a beginner’s guide to adulthood for me. It introduced me to a liberal world that I never knew existed.

Thinking about adulating was frightening but Friends made it look much more fun than I could imagine. Their lens focussed on the fun of the glorious mess that adulthood was.

We laughed our hearts out and we cried as each season went by. From a bunch of twenty-something young guys, we see the six friends grow into their best possible selves, and their journey is something that we will cherish for life.

However, being a girl from a slightly conservative background (obviously trying to break free from it), the three female leads of Friends inspired me the most.

The show starts off with Rachel Greene barging into Central Perk right after she has left her fiancé at the altar. She has run off to a new city where she hardly knows anyone. She has come to this place to figure out what she actually wants, or to put it in her words ‘All my life everybody said you are a shoe! What if I don’t want to be a shoe, I want to be a hat!’

Ain’t all of us Rachel, young minds unaware of what we actually want to do with our lives and following what is expected from us? And like Rachel Greene, if we show the courage to ‘leave everything at the altar’ we might be able to slowly figure out what we actually want.

The spoilt daddy’s girl starts off from nothing only to scale heights in the fashion industry. She even got pregnant with Ross’s child but did not oblige to marriage just for the sake of it. She again opts for the scary and raises the baby as a single mother.

It’s not just Rachel, but every female character from Friends has something special to teach us, we just need to listen stoically.

No matter how quirky Phoebe may be, she is definitely the most carefree woman we are going to see. She sings her heart out, chews her own hair, and is least affected by judgments. If being carefree had another name, it would Phoebe. Phoebe having her half-brother’s triplets is one of my favorite moments. It not only showed surrogacy in a healthy light but also gave us a glimpse of the wonderful mother she would have been. It was melting to see her bid goodbye to the triplets she bore.  We never got to see the aftermath of Mike and Phoebe. Well, let’s just assume that they had a couple of children who sang ‘Smelly Cat’ just like her and lived happily in New York City.

The perfectionist Monica gave some serious life-saving hacks too. You can not live alone in a big city all by yourself if you aren’t half as organized as Monica! Monica was the most responsible and matured one in the gang, I believe. She fell in love with a man more than twice her age and owned the relationship unapologetically. And when it was time to part ways, she mustered the courage to bid him adieu. Though I did feel that she dominated her relationship with Chandler at times, it is not much of an issue because that’s what Chandler loved about her! We see a desperate mother in her, longing to take care of her kids and cook her ‘Monica special’ for them. And through adoption, she owns her motherhood.

Phoebe, Monica, and Rachel owned motherhood that was of the least acceptable form according to societal norms. And they made it look completely normal and respectable, just like normal motherhood.

All the women prioritized themselves over their partners’ needs. They refused to fit in a relationship where their wishes were not welcome. Or to put it their way ‘did not let the guy steal their wind’. And in that way, they were my ideal for liberal, independent, and carefree women.