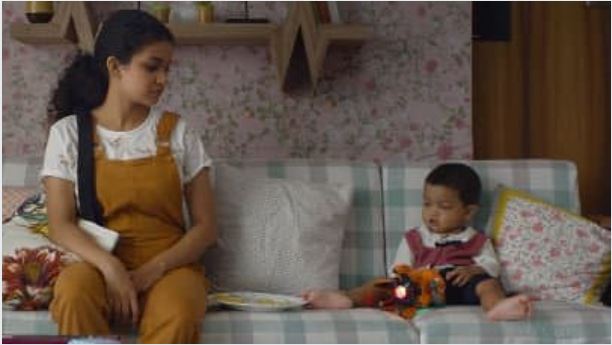 A vague but significant tale that needs to be told

All this while we have glorified pregnancy and motherhood. We have glorified the sacrifices a woman commits in her role as a mother. Motherhood hence became the benchmark of womanhood, something that makes the life of a woman complete. But does it really?

Should motherhood be a social obligation instead of a personal choice? That’s what the recently released Malayalam movie Sara’S tries to introspect.

Anna Ben plays a flamboyant young aspiring filmmaker Sara who is not interested in conceiving a child. It is not that she hates kids or responsibilities, she just doesn’t feel like she is cut for the task.  The film starts from her school days where she is seen making out with her boyfriend. And as they begin discussing their future plans while eating egg puff, she tells him how she never wants to give birth. The guy leaves as he doesn’t want ‘a puff without egg’; as quoted in the movie, indicating the premise of the film.

Sara is not ready to change her decision. She comes across Jeevan, a good-looking IT professional who, just like her, does not want to have children. They get along well and decide to marry each other. And now is where the trouble begins. The constant pestering by the elders of the family makes things difficult for Sara.

The movie introduces us to a widely neglected personal choice to embrace parenthood. It does so in a very light-hearted tone, without getting preachy. The makers in no way trying to undermine the difficulty of raising a child or belittle the sacrifice made by several parents in this world. The movie just speaks for those who do not feel ready for such a sacrifice. ‘Better not be a parent, than being a bad parent’, will only result in a beautiful world, won’t it?

Sara’s father (played by Anna Ben’s real-life father Benny P Narayambalam) is a character that deserves a mention. He plays a loveable father who has a track record of his daughter’s previous affairs and uses them as an achievement instead of manipulation! Jude Anthany Joseph knows his way in projecting the best father-daughter relationship in Malayalam cinema. Though not as cool as Ranji Panicker’s father character in Ohm Shanti Oshana (directed by Jude himself), Benny P Narayambalam does win our hearts.

Having strong and unconventional male characters add to the strength of a female-led movie. In Sara’S, Jeevan and Sara’s father gracefully do that part.

The visuals are pretty and every frame looks beautiful. The style adorned by the characters is also catchy.

Anna Ben shines as Sara and carries the entire film on her shoulders. Sunny Wayne also offers a praise-worthy performance.

The film however is not a perfect one. Though it attempts to make discussion on a relatively new subject, it turned out to be a little vague. The script lacks a certain grip and strength. Though Sara’S may not be intense in its narrative, it is definitely a conversation starter.