From Hera Pheri to Dhadak-How good are these Bollywood Remakes

Several regional films are remade into Bollywood every year and some of them turn out to be good while some leave us disappointed. Here are eight Bollywood remakes of south Indian films and films of other languages. Let’s see how much justice they did to their originals.

The original Marathi film Sairat turned out to be a blockbuster hit not just in Maharashtra but across the entire nation in spite of having two newcomers. With excellent scripting, realism, and spectacular performances, Sairat received a reputation that is well deserved.

Now coming to its Bollywood remake Dhadak, it was a more colorful version of Sairat with a filmmaking style that disregarded the idea of realism (like most Bollywood films). The worst part about the movie Dhadak is how it dodged the need to convey the powerful message that Sairat tries to give. The end scene of Sairat had a much deeper impact than Dhadak’s ending. However, the performances by the debutants Ishaan Khatter and Janhvi Kapoor were convincing and they did a decent job in their debut film. Arjun Reddy was a huge commercial success and offered a big break for actor Vijay Devarakonda. However, it is interesting to see how Arjun Reddy sneaked its way to success without getting hooked into the misogyny debate as much as its Bollywood adaptation, Kabir Singh.

Shahid Kapoor was the perfect choice for the movie Kabir Singh and did his job extremely well. Since Kabir Singh is an exact copy of its original, there is hardly any difference between the two, and watching either one would be just a matter of language preference! While remaking an 80s Malayalam movie almost twenty years later it is important to modify the story according to the time frame and cultural backdrop. Unfortunately, Khatta Meetha fails to do so and thus ended up being a box office disaster.

Vellanakalude Naadu is a significant movie that every Malayalee keeps close to their heart. Khatta Meetha tries to imitate this 80s movie without any modifications and therefore lags and bores its audience.

OK Jaanu fails to create a profound impression like the original, mainly because the latter showed the relationship and intimacy in a much more mature way than some random hookup. However, the chemistry between the leading pairs is amazing in both films.

Dulquer and Nitya Menen seemed more convincing as Adi and Tara in this Mani Ratnam directorial. If ever given a choice, I would undoubtedly pick OK Kanmani over OK Jaanu. Ramji Rao Speaking is one of the funniest films of the 80s and you can find millennials still having a hearty laugh after watching this film. While remaking it into Hindi as Hera Pheri, Priyadarshan did total justice to the storyline, adapting to the required time frame and cultural backdrop. Hera Pheri is as funny as Ramji Rao speaking (the ever trending Hera Pheri memes are a testimonial to that!). A Mani Ratnam film is a Mani Ratnam film in the end and no matter how you remake it, it is nearly impossible to recreate the same amount of freshness and beauty that he creates with his magical frames. Alaipayuthe stands out as Mani Ratnam’s finest romantic film and even today, after 20 years, has not lost its throne.

Saathiya however was a pretty decent remake of the film with Rani Mukherjee and Vivek Oberoi reprising the roles of Shalini and Madhavan. It managed to be an average hit at the box office but failed to resonate as strong as Alaipayuthe.

A cult classic Malayalam movie, Manichitrathaazhu is one of the finest films ever made in Indian Cinema. Directed by Fazil, the film went on to earn a huge reputation and love from the audience. The film was remade in several languages but the only decent one was Bhool Bhulaiyya. Though not fully convincing to someone who has already watched the original, Bhool Bhulaiyya does a good job as a decent remake and also went on to set cash registers. 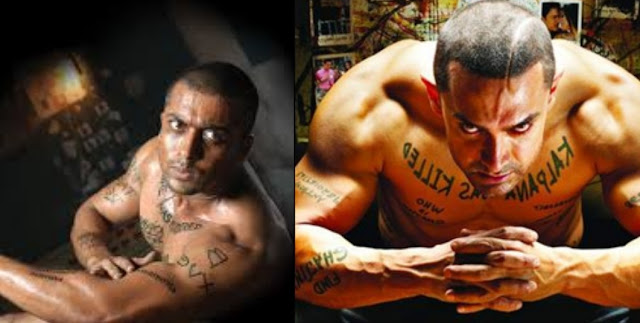 Seems like the titular villain remained the same in the remake as well. People say it’s really rare to love the remake more than the original, well, here we are! The Hindi adaptation of Ghajini seemed much better to me than the original. The remake is less of “entertainment masala” and more of sensible content. Maybe that’s why it went on to become the first Hindi film to garner 100 crores.

The performances by the lead actors Suriya and Aamir Khan are incomparable and unique. The brilliance of director A R Murugadoss just leveled up in the remake.

Ok, now a question for you; with so many upcoming Bollywood remakes of south Indian movies, which film (irrespective of the language) do you wish never gets remade in Bollywood?

Drop your answers in the comments.