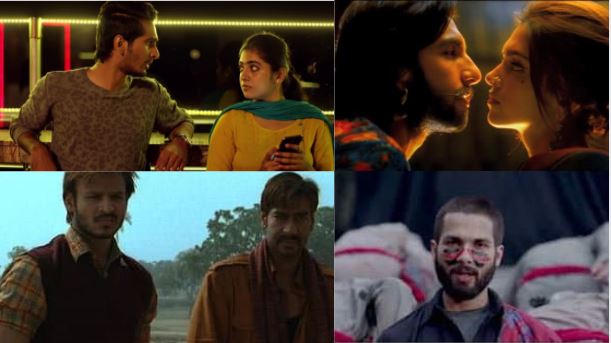 William Shakespeare, the undisputed king of world literature has numerous tragedies to his credit. The charisma of these tragedies is how it stood the test of time and is finding adaptations even after centuries. Here are a some famous works of the great writer and their adaptation in Indian cinema.

I) Romeo and Juliet

The much celebrated Shakespearean tragedy Romeo Juliet is a timeless classic that remains significant after eons of its publication. Love obstructed by class divides has never found its way out of the world. Countless couples forgo their love for the same reason. Set in the city of Verona, Romeo Juliet is a tale of two star-crossed lovers belonging to rival gangs. The feud between their families does not stop them from uniting and they decide to end their lives. The story has served as a premise for several plays and movies. Coming to Indian cinema, Romeo Juliet was adapted in these two movies. Sanjay Bhansali’s 2013 dramedy Goliyon Ki Raasleela Ram Leela is a perfect Bollywood adaptation of the timeless classic. Deepika Padukone plays Leela, Bhansali’s Juliet while Ranveer Singh plays Ram, Bhansali’s Romeo. The city of Verona here becomes a fictional village in Gujarat called Ranjhaar. Death of the hopeless lovers is inevitable. But unlike Romeo and Juliet, Ram and Leela do not poison, rather they shoot each other out of desperation. They choose to die together if not able to live together. The film really brings out the true essence of the original novel.

While refining Romeo Juliet for the Malayalee audience, it is important to adapt it with relatability and Eeda does a fine job there. Directed by B Ajithkumar, Eeda is the Shaksepearean tragedy set in the political warfare of Kannur, a district in Kerala. Aishwarya (Nimisha Sajayan) and Anand (Shane Nigam) are two lovebirds with their families belonging to rival political parties. The death of their kith and kin leaves them in utter despair. But their love for each other does not depreciate. It stays firm and strong like it always was. Do they die, as is inevitable in the original piece? We never know. The film ends with them dodging away all the hate, holding their hands and walking towards freedom.

Macbeth is Shakespeare’s shortest tragedy. The titular character of the story, Macbeth is a Scottish general to King Duncan. Three witches tell Macbeth that he will become the King of Scotland. Upon being encouraged by his wife, Macbeth kills the king and turns paranoid. There’s only one Hindi film made on Macbeth and it is Maqbool.

In 2004, Vishal Bhardwaj adapted the story to make Maqbool starring Irrfan Khan and Tabu. Maqbool is the first of Bharadwaj’s Shakespeare trilogy. Irrfan Khan plays Maqbool, the right-hand man of Jahangir Khan (Pankaj Kapoor), a powerful underworld don. Maqbool kills Jahangir Khan to take over his empire but is later driven by guilt and meets a tragic end.

Othello is the story of an African general in Venetian army who is tricked into suspecting his wife of infidelity. Given its varied and enduring themes of racism, love, jealousy, betrayal, revenge, and repentance, Othello is still often performed in professional and community theatre alike, and has been the source for numerous operatic, film, and literary adaptations. It was remade into a Malayalam and a Hindi film.

Kaliyattam is a 1997 Malayalam adaptation of the renowned classic set in the backdrop of the Hindu Theyyam performance. Suresh Gopi reprises the role of Othello, a performance which fetched him National Award for Best Actor. Director Jayaraj won Best Director award for the same film. The film was a commercial and critical success.

Omkaara is the second instalment of Vishal Bharadwaj’s Shakespearean trilogy. Released in 2006, the film has an ensemble cast and turned out to be a success, winning several awards worldwide. The film is least similar with the Malayalam adaptation of Othello.

Hamlet, written by William Shakespeare is one his longest plays with around 30,557 words. It is considered as one of the most influential and powerful work in the world of literature. Hamlet is the story of Prince Hamlet who is desperate for vengeance with his uncle Claudius who murdered his father for the throne and later married his mother. Here is the Indian adaptation of the renowned classic.

The only popular Indian adaptation of Hamlet is Haider, directed by Vishal Bharadwaj. It was the third instalment of Bharadwaj’s Shakespearean trilogy. Haider (played by Shahid Kapoor), a young student and a poet, returns to Kashmir at the peak of the conflict to seek answers about his father’s disappearance and ends up being tugged into the politics of the state. Backed by some mind-numbing performances by Shahid Kapoor and Tabu, the film is sure to give some chills.

Also Read : Indian Films at the Oscar-The Story So Far