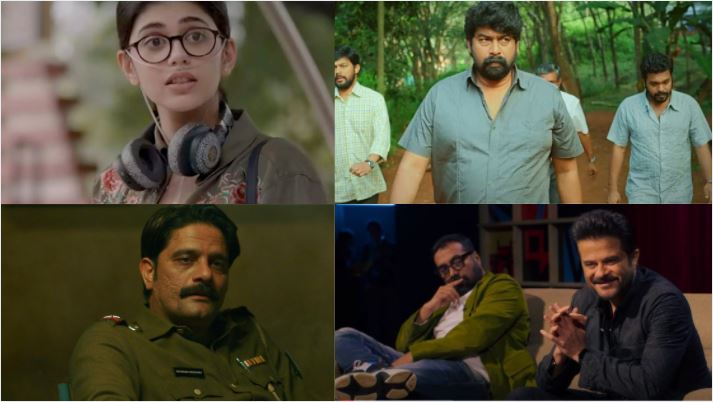 2020- A year that started out with much hope and excitement took an unexpected deviation that we apparently were not prepared for. Our plans went wrong, vacations got canceled and we were forced to confine ourselves to four walls of our house. Though the year turned out quite depressing to all, if you actually look back, maybe it wasn’t that bad. We got to spend some family time (a common rarity in this century), got to brush up on our old skills (which once we were a master of!) and we even reconnected with some old friends.

However, for someone who is a movie buff (such as myself), the news of the nationwide lockdown was a bit hard to swallow. Theatres were shut down indefinitely and films lined up for release were shelved. It was indeed a hard year but like I said, maybe not that bad at all. Yes, the satisfaction of living the movie was temporarily on hold but thanks to OTT, the entertainment game was always up. Here’s a brief insight on how the films and film fanatics made it through the pestilence.

Rewind 10 months back. With some amazing films in January and February, the theatres were immensely successful in setting the cash registers. But with the shutting down of theatre, the film fraternity was plunged into a huge dilemma. With several releases already planned and post-production work still on the floor, the industry incurred a huge loss due to the pandemic.

The Rise of OTT

But as they say, the show must go on. OTT platforms came as a rescue for the hungry audience, like rainfall on a barren island. The growth of all the OTT platforms in the last 10 months is extremely huge.

The size of screens reducing to the size of our phones did have an impact on our movie viewing experience. Alas, nothing can replace the feeling of watching and immersing yourself in the big screen of a theatre. But we were left with not many options.

It wasn’t just films that were served to us by the OTT platforms, but also all kinds of content that kept us engaged and entertained throughout the pandemic. May it be standup specials, documentaries, shows, and web series, there wasn’t any content crisis despite the restrictions imposed.

It is interesting to notice how several filmmakers took the lockdown and the pandemic as an inspiration to create something refreshing and exciting. The Tamil anthology film Puthum Puthu Kaalai, Malayalam movie C U Soon, Bollywood film Unpaused (all streaming on Amazon Prime) are a few to mention. Putham Puthu Kaalai and Unpaused were more centered around how the nationwide lockdown affected different sections of the country. However, C U Soon was a full-length thriller movie shot brilliantly in spite of the restrictions prevailing for film shoots.

Some much-anticipated films like Minnal Murali and Marakkar-Arabikadalinde Simham refrained from seeking refuge in OTTs this year. The makers argued that the films were made on a huge budget and the OTT release will give them a run for their money.

With vaccine distributions in effect, the government has decided to relax the restrictions on theatres. But apprehensions regarding individual safety are still a huge matter of concern and are inviting arguments from all parts of the country. Thalapathy Vijay’s Master was the first film that was released in theatres after the lockdown. Vijay fans sure did celebrate the release; however, the film was taken over by Amazon Prime Video after a week.

Heavy budget movies like Minnal Murali and Marakkar-Arabikadalinde Simham are yet to finalize a release date. Looking at the history of the theatrical releases so far, let’s just keep our fingers crossed for these high-expectation films. These are the films that can revive the lost cinematic experience in theatres and fetch come money for the makers. It would be lethal if these films are streamed by OTT giants instead of getting a theatrical release! But I guess it is all purely circumstantial. The makers, based on what’s good for them and the film, will take a final call.

The pandemic has however increased our dependency on streaming platforms for entertainment. No doubt, they were the only ray of hope while we were shut in our homes indefinitely. Do you think this pandemic effect will influence the way we watch cinema in the coming future? Will theatres be rendered empty because of this dependency of ours? Only time can tell.

So, what are your thoughts on the same? Tell me in the comments.

Read: 10 Best Malayalam Movies of 2020 that one our hearts

2 thoughts on “Experiencing Cinema in the times of Pestilence”